Visit My New Shop on Etsy

Hi everyone.
What a gorgeous day and week here in New Jersey!

On a recent trek through the Golden Nugget Flea Market in Lambertville, NJ, I found two boxes of great finds! The first box I found is chock full of Ball jars, some with zinc lids and others with glass lids and bale wire closures. Only $10 for the lot, and well worth it. Now they just need a good cleaning! 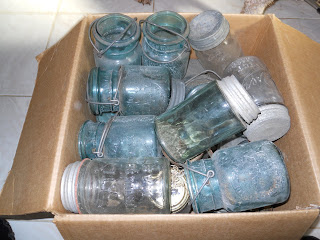 The second box of treasures is full of vintage green depression glass vases and a green blown glass pitcher. Also $10 for the box, and well worth it. I am not sure that the pitcher is old, but it is very beautiful. 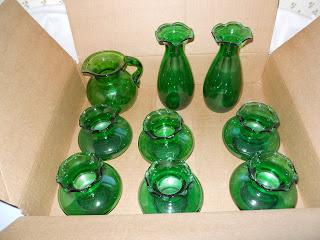 Now that Spring is finally here, I am looking forward to more antiquing trips at the local flea market and various other locations.

What have you found recently? Please comment to let us all know.

Have a great weekend.

Sincerely, Lynn
Posted by Lynn MacKerell @ Antiques for Today's Lifestyle at 5:54 AM 3 comments:


I was just 4 years old when Ruth Handler invented the Barbie Doll in 1959. I remember many days filled playing with Barbie, my sisters and our friends. Mom let us create an entire Barbie town in the basement. Oh, those were the good old days.

Barbie was named after Ruth's daughter, Barbara. The doll was designed to inspire Barbara's dreams for the future and has inspired many millions (billions?) of other young girls in the past 50 years. The Barbie Doll has changed with the times and remains one of girls' best friends. Barbie's clothes and face changed along with societal trends over the years. The Barbie product line has also become multi-cultural, as well it should have. The Barbie product line is the most successful in the history of the toy industry!

You may recall that the first Barbie had a zebra striped bathing suit, sandals, a ponytail, sunglasses and earrings.

Barbie dolls became highly collectible. Collecting Barbie dolls seems to have begun in the 1970s, soon after the vintage look dolls were no longer being produced. In the late 1980s, Mattel started creating dolls aimed at adult collectors. By the 1990s, collectors had started hoarding Barbie Dolls and they became hard to find, so Mattel had to increase production, thus making the collectible dolls drop in value. By the end of the 1990s, it appeared that the collecting craze was over.

This Barbie doll, circa 1990, sports a WNBA uniform, complete with a Spalding basketball and a trophie. She will soon be available in my Etsy shop. 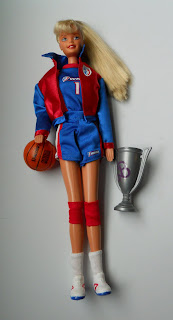 In 1999, came the Barbie Fashion Model Collection. Collectors were now excited about the couture fashions and the availability of couture fashions sold separately as well. Accessories were also included. These dolls sold like crazy and became harder to find too. New collectible Barbie dolls have continued to be introduced over the years.

What are your favorite Barbie doll memories? Are you a collector? Please comment to let me and my readers know!


Posted by Lynn MacKerell @ Antiques for Today's Lifestyle at 12:18 PM No comments:

I hope you have a wonderful Easter! Enjoy these vintage Easter postcards! 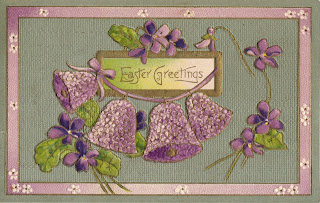 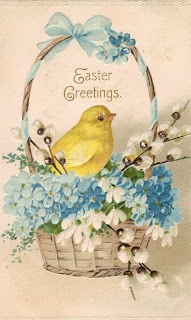 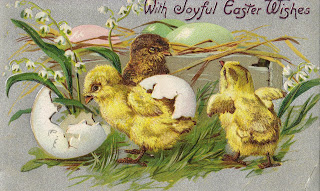 I love this beautiful angel. 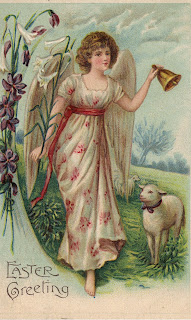 Good morning. Easter is almost upon us, along with spring, both bringing good tidings of renewal of life and spirit. This Easter tablescape is set for a luncheon, as Mom always celebrated Easter with a luncheon right after church on Easter Sunday. Tuna salad sandwiches anyone? (Made with hard boiled eggs, of course.) 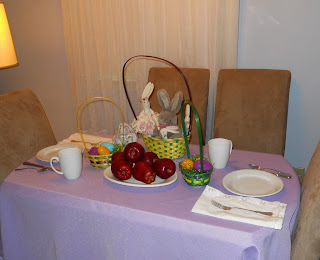 In this setting, antique ironstone luncheon plates from Johnson Brothers. They are gorgeous and in great condition. 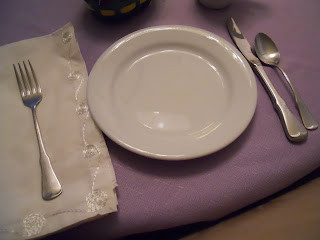 This small oval antique ironstone platter, though not in mint condition, is a terrific serving plate. 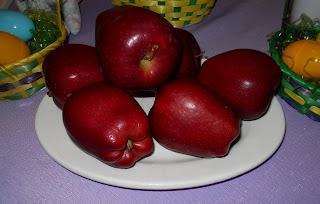 And, of course, in my house there are always stuffed bunnies and bright colored baskets at Easter time. 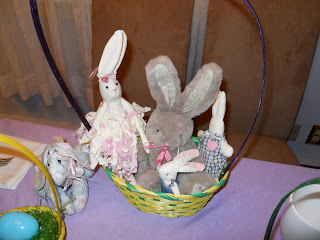 I love the new momma and baby bunnies I got this year. 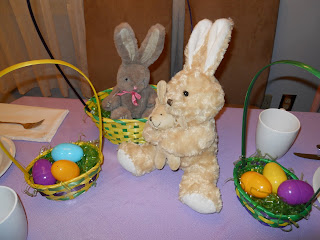 Did you decorate for Easter this year? Did you use any of your antique or vintage collectibles? Please share what you did.

Sincerely, Lynn
Posted by Lynn MacKerell @ Antiques for Today's Lifestyle at 6:31 AM 1 comment:

Hi.
It has been a snowy, rainy day in New Jersey, no April Fool's joke, unless God is playing April Fool's! 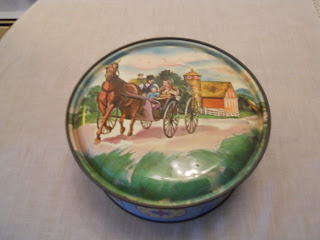 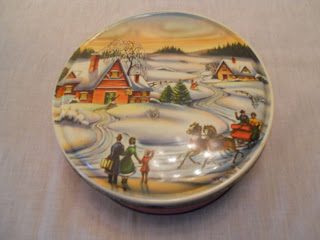 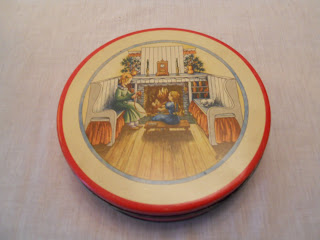 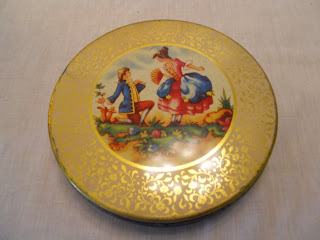 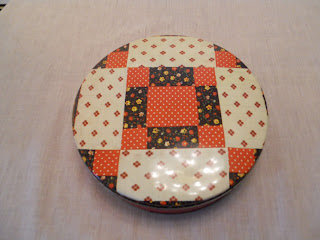 This is a cookie tin I picked up recently for 97 cents at the Goodwill thrift store. This one is in my booth at Rosebush Antiques. 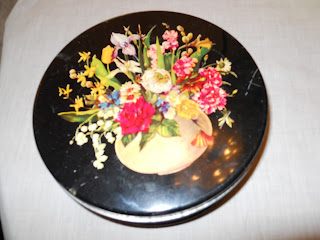 Another way to use vintage cookie cans today, if you like the art work on the lids, is as, well . . . art! Just take the lid off the can and hang it on the wall. They make great kitchen art. 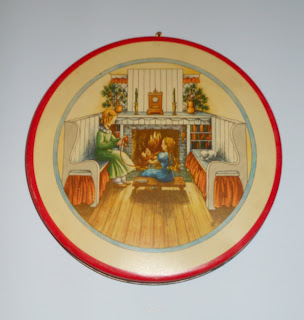 I hope you have a GREAT day.

Sincerely, Lynn
Posted by Lynn MacKerell @ Antiques for Today's Lifestyle at 8:26 AM 1 comment:

Hi everyone. As many of you know, I LOVE vintage blue bottles and have quite a collection of them. But did you know I also love vintage brown bottles? Any grouping of collectibles, such as bottles, will look great when shown in a grouping where they are all in the same color or color family. 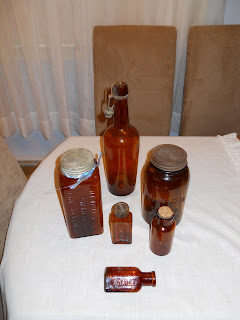 On a recent antiquing spree, I found this gorgeous Wan-Eta Cocoa jar, from Boston! It looks like a Ball jar, with a zinc type of lid, but has a unique shape to it. I have not seen a cocoa jar before. 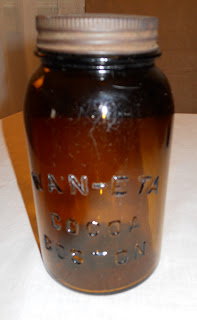 This brown jar is from H.K. Mulford Co. Chemists in Philadelphia. 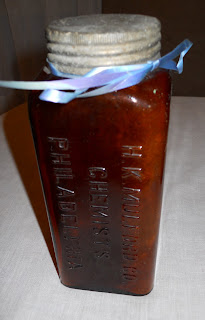 And this small bottle, with the triangular shaped front, is a poison bottle. Up until recently, I had not seen a brown poison bottle, just cobalt blue poison bottles. 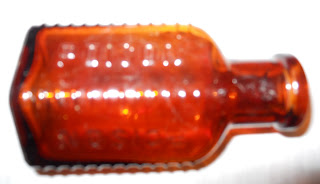 Whatever color you love, there are probably some vintage bottles or depression glass pieces that will look great as accents in your home.

Have a great day. Sincerely, Lynn
Posted by Lynn MacKerell @ Antiques for Today's Lifestyle at 7:44 AM No comments:

Good morning. Although cold this morning, it is a bright sunny day in New Jersey. On Saturday I found this vintage cornucopia basket at the Goodwill thrift store. When I got home, I came up with the idea of making an Easter Cornucopia. Cornucopias are typically seen around Thanksgiving and I don't think I have ever seen one at Easter. 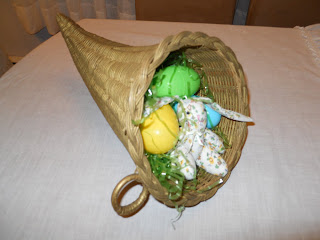 It was very inexpensive to make, with a Bunny I already had and a few plastic eggs and some grass from Target. 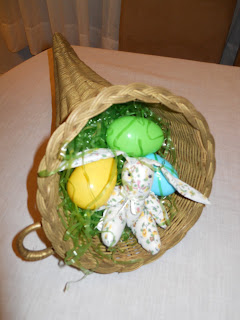 I think it looks so adorable and I will use it for my Easter decor this year.
I am linking with Masterpiece Monday with Mary @ Boogieboard Cottage.

Have a great week!

Sincerely, Lynn
Posted by Lynn MacKerell @ Antiques for Today's Lifestyle at 4:53 AM 1 comment:

Lynn MacKerell @ Antiques for Today's Lifestyle
I have had a love of antiques since I was a child and learned about antiques from my mother. I frequently visit flea markets, antique malls and antique shops. I have my own antique booth in a local antique mall, Rosebush Antiques, in Langhorne, PA. I love finding new ways to use antiques in my home.